In Congress, he was a member of the House Judiciary Committee for eighteen years, specializing in the issues of crime, immigration, legislation, and oversight.  In that capacity, he was involved in the act of oversight of the U.S. Department of Justice.  Additionally, Lungren served on the House Intelligence Committee and was a senior member of the House Committee on Homeland Security.  Included among his legislative achievements are the Comprehensive Crime Control Act, the anti-terrorism Safe Ports Act, amendments to the PATRIOT Act, and legislative language establishing the chemical facilities anti-terrorism regime (CFATs).

As a recipient of the prestigious Wyman Award from the National Association of Attorneys General, he was acknowledged as the nation's most effective attorney general. He was recognized as the “top cop” for the State, having direct supervisory responsibilities over all the sheriffs and district attorneys.  As head of the Division of Law Enforcement, he commanded the Bureaus of Narcotics Enforcement and Investigation, directed scores of multi-jurisdictional task forces and oversaw numerous forensic laboratories.  A national leader on criminal justice issues, he was recognized by his peers in the National Association of Attorneys General with the Wyman Award as the best attorney general in the nation.  Among his many accomplishments, he established one of the nation’s top Community Oriented Policing programs. 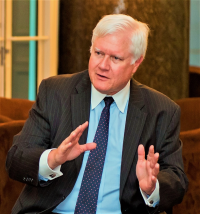 Brian launched his career in Washington over 30 years ago. He has helped clients achieve their goals before Congress and Executive Branch agencies in many ways. In particular, he has a long track record of success in utilizing congressional oversight of federal agencies to impact agency decisions.  Among other positive outcomes, these campaigns have resulted in the reversal of misguided agency decisions by OSHA, FDA, and U.S. Customs and Border Patrol.  Clients have also secured multi-million dollar awards through competitive and non-competitive grants, and through congressional appropriations because of his efforts.

Brian has worked for three Members of Congress including service as Chief of Staff and Legislative Director to the Hon. Ernest Istook (R-OK), who later became a House Appropriations subcommittee chairman.  He served as a presidential appointee during the Reagan Administration at three agencies.  He was responsible for all public building issues within the General Services Administration Office of Congressional Affairs, was Director of Interagency Affairs at the Department of Education, and was a grant manager at the Department of Transportation.

In his career, Brian was also Of Counsel as an attorney/lobbyist for fourteen years at Patton Boggs LLP, consistently ranked as the top public policy law firm in the country, and was Senior Advisor to The Thompson Advisory Group.  In addition, Brian was the director of government relations for two of the most prominent grassroots citizen groups in the country.  He has built grassroots and grasstops chapters from scratch in five states. The National Journal has called him "one of the best-connected lobbyists around."

Brian received a B.A. in Psychology from the University of Notre Dame and a J.D. from the DePaul University College of Law.  He serves on the Board of Visitors of The Engalitcheff Institute at The Fund for American Studies and is a lector at St. Veronica Catholic Church in Chantilly, VA. He and his wife, Maureen, are the proud parents of three adult children.